LED spotlights are especially designed to replace compact fluorescent light bulbs or the classic screw-in incandescent bulbs. Most of them can replace incandescent lights between 5-60 watts, and over the past several years numerous manufacturers started to produce higher wattage LED spotlights. It must be mentioned that most models of high power LED spotlights work with dimmers, and they usually have directional light characteristics.

Fortunately, the price for LED spotlights had dropped considerably, and although they are a bit more pricey than incandescent bulbs you will save more money in the long run, because they are more energy-efficient. The lifespan of these bulbs is usually between 30,000 and 50,000 hours, but the average life is reduced if they are operated at a higher temperature than recommended. Typically, incandescent bulbs have a lifespan of no more than 1,000 hours, while CFL bulbs (compact fluorescent bulbs) have a life of about 8,000 hours. The LED bulbs, on the other hand, can maintain an efficient output light intensity even after their life-times.

Another important aspect regarding high power LED spotlights is that they are free of mercury and they are available with a wide range of color properties. The technology used when manufacturing the LEDs is improving rapidly, and more efficient and cost-effective LED lamps are being released on the market every day. The typical LED spotlight uses no less than 60 individual light emitting diodes for mains voltage power.

LED spotlights for general purposes emit light in a small band of wavelengths – in order to emit white light, LEDs have two options: they either use phosphor in order to convert some of the light to various other colors, or they mix the light that results from green, red and blue LEDs. The spotlights are available in various colors, but pure white is the most common choice.

LED ceiling spotlights have become very popular lately, due to the growing concerns regarding the non-renewable energy sources and the high energy bills. Just as the name implies, these spotlights are commonly used in homes – LED spotlight systems are used in living rooms, kitchens and bathrooms, and they are also used for under cabinet lighting. Some spotlights are designed for outdoor use as well, and most of them offer bicromatic or policromatic light instead of the traditional monochromatic light (a single color, usually white).

In addition to being very environmentally friendly and an excellent energy saving opportunity, the high power LED spotlights are also available in full range of colors, from cool white to warm white. Moreover, they come with an improved thermal management system that contains an internal copper heat conductor. The aluminum encasing makes the spotlight very lightweight and easy to handle and install. 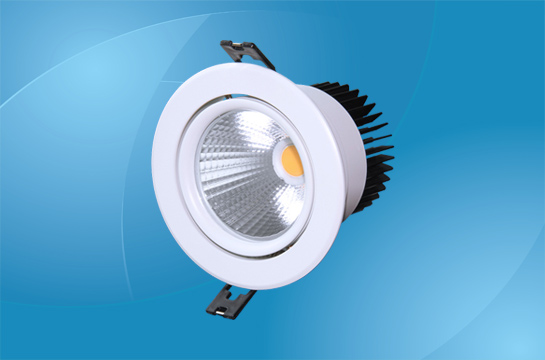