A solar light is defined as a light fixture that is composed of a rechargeable battery, photo-voltaic panel (solar panel) and a bulb lamp. Outdoor lights of this kind may have a battery, solar panel and lamp integrated as a single unit. Indoor solar lights, with solar panels that are separately mounted, are utilized for general illumination in situations where electrical power is not economically or conveniently available. LED solar lights have similar characteristics with some differences here and there. They are currently gaining popularity as they may displace other sources of light such as kerosene or propane lamps. All LED solar lights have four major components:

Rechargeable battery
A battery is a crucial component of any solar powered system. It will store electricity generated by the solar panel during the day, and provide energy to light fixtures during the night. LED solar lights have their own batteries that have varying life cycles. The battery’s life cycle is very important as it will affect its lifetime. Backup days / hours of LED lights are affected by the capacity of the battery. Usually, these systems use two types of batteries; Lead Acid Battery and Gel Cell Deep Cycle Battery.

LED solar lights have many uses. The uses can be divided into two major categories; indoor and outdoor uses.

Indoor
Indoor LED solar lights have 2 – 10 LEDs. They are powered by solar panels that have 2W to 20W. Lighting systems of this kind can either be switched on manually when the user is in the vicinity, or they can be programmed to go on / off at specific times of the day and night. They can be used in homes, offices and any business premises that operate during the night. Installation of this type of lights is quite easy.

Indoor LED solar lights are mostly constructed using heavy duty cast aluminum combined with a toughened glass cover. Simpler models come with a 3.6 Volt 2,000MAH Ni-MH battery. The most common solar panel is a 5volt 2 watt glass covered solar panel. The power output of the battery and solar panel is determined by the number of solar lights used and their power rating.

Outdoors
When it comes to outdoor LED solar lights, one of the most prevalent application is street lights. Due to shortage and / or high cost of energy, there are more and more markets that need lights powered in an energy saving and environment friendly fashion. LED solar street lights can be described as raised outdoor light sources which are powered by photo-voltaic panels (solar panels) mounted on the lighting structure. The panels charge a rechargeable battery which in turn powers an LED lamp during the night. 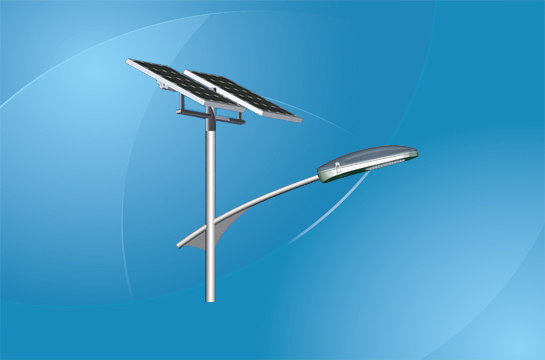