As the interest in energy efficiency increases, compact fluorescent lights, also known as CFLs, continue to grow in popularity. There are many types of CFLs available for application in many different fixtures. Among the most frequently mentioned are the GU24 bulbs.

GU24 CFL bulbs have provided users with a great choice for economical, energy resourceful and user-friendly lighting. With a design that solves past problems with high-efficiency bulb bases, the GU24 CFL lamps have become the new standard.

Basically, GU24 CFL bulbs are designed with the base attached and have two pins which are intended to particularly lock into GU24 light fixtures. The pins typically protrude from the base rather than the standard spiral screw evident in traditional bulbs. To install a GU24 CFL bulb, these pins are twisted into the matching holes and then locked into place. In addition, GU24 bulbs are produced with the ballast attached therefore do not require different socket designs for varying wattage types.

Given that the ballast and lamp is one unit, GU24 CFL bulbs typically tend to be shorter than other CFLs. In this regard, they are available in a range of lengths with some being as small as 3.1″ and others as long as 4.5″. The width of a GU24 CFL lamp in inches is denoted by a T2 or T3. The value after ‘T’ represents the diameter in eighths. For instance, a bulb measuring 3/8″ in width is referred to as a T3 while a lamp measuring 2/8″ in diameter is a T2.

Unlike other pin-based bulbs, GU24 CFL bulbs are not limited to a particular manufacturer. Instead, they can be used in all fixtures that are GU24 compatible. Also, their replacement does not depend entirely on wattage. For instance, a 26watt GU24 CFL bulb can be easily replaced with any GU24 of equal or smaller wattage. In addition, GU24 CFL bulbs are available for application in dimmable units and are usually compatible with many standard dimmers.

The number of lumens GU24 CFL bulb has determines the brightness to be achieved. The more lumens it has, the more power is needed to reach that particular brightness. This means that a GU24 CFL bulb with 900 lumens will utilize only 13 watts while a bulb that measures 1,750 lumens will use 23 watts.

GU24 CFL bulbs tag along similar color spectrum as other CFL lamps. The color produced by these bulbs is based on the degrees Kelvin measured. The color temperatures include 2700K, 3500K, 4100K, 5000K and 6500K.Usually, the higher the color temperature in Kelvin, the whiter the bulb light will appear. For instance, at 2700K, the GU24 CFL bulb emits a warm white color, perfect for living room surroundings. And at the brightest, a GU24 CFL bulb with 4100K gives off a cool white light preferable in rooms where a bright white light is needed, such as a drawing or reading room.

Like all other CFLs, GU24 compact fluorescent bulbs use up to 75% less energy and last up to 10 times longer than the standard incandescent counterparts. Moreover, these GU24 type CFLs are easy to install, replace and are available in many different stores. 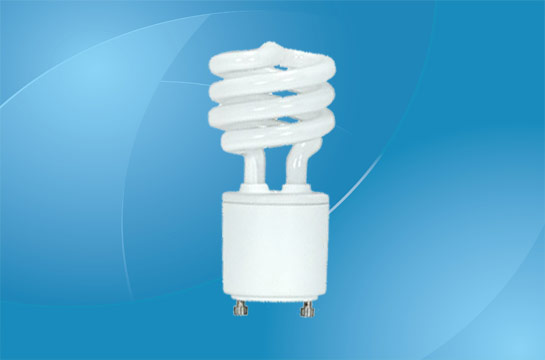