With the steady decline of old-fashioned incandescent light bulbs, demand continues to grow for newer, more energy efficient replacements. Among the latest entries into the market are A-line LED bulbs. These include 12 watt bulbs which are intended to replace traditional the 60 watt variety, though they are available in ratings equivalent to 40 to 100 watts from an incandescent bulb. Production of the new bulbs is being steadily ramped up, as incandescent light bulbs gradually begin to move out of the living room and into museums.

Reduced power consumption
Although political maneuvering has meant that the Energy Independence and Security Act has not managed to mandate the complete outlawing of incandescent light bulbs, American factories are ceasing to produce them and so LED bulbs are taking over in any case. Their advantages in terms of energy efficiency are clear: the 60-watt equivalent variety provides 810 lumens of light, which is identical to a traditional 60 watt bulb, but it does so using just one fifth of the power, a mere 12 watts.

A-Line LED bulbs also last a great deal longer than their incandescent predecessors, with life being rated for up to 25,000 hours of use – well over a decade in typical applications. Although they do cost more to buy than the older types, their low power consumption and long life makes them much more economical in the long run. They also have other advantages, in that fewer burned out bulbs per household per year equates to much less waste going in the trash. Multiply that by the number of households in the country, and the overall potential saving is huge.

Comfortable on the eyes
These A-line bulbs are carefully calibrated to ensure that they provide a very similar lighting effect to that which consumers have become used to over many decades of using incandescent light bulbs. In technical terms, this means a color temperature rated at 2,700 Kelvin. In practical terms, it means that the LED bulbs are capable of giving off the same warm yellow light as an old fashioned bulb. This overcomes one of the principal complaints about earlier LED light bulbs: that they gave an unpleasantly harsh blue-white light. They can also be styled into a vast range of shapes suitable for any room.

One of the key complaints regarding earlier types of energy saving light bulbs has been that they were unsuitable for use with dimmer controls. A-Line LED bulbs are dimmable down to just 5% of their maximum brightness, at least as flexible as traditional incandescent bulbs with dimmers. This makes them ideal for use in places such as children’s bedrooms where a dim level of lighting is required overnight, but without making the room completely dark. The bulbs also warm up instantly, which gives them an advantage over older types of lamp.

The greener light bulb
Consumers who are choosing LED bulbs are generally conscious of their impact on the environment. A-line bulbs, unlike compact fluorescent light bulbs, are entirely free of mercury, removing one of the major concerns about CFL lights – the contamination they could cause if broken. The new bulbs comply with RoHS standards, and are able to withstand being cycled on and off rapidly with no ill effects. Their steady light and small size also allows them to be used effectively in photocells and motion lights. This combination of versatility and efficiency is what makes A-line LED bulbs such winners. 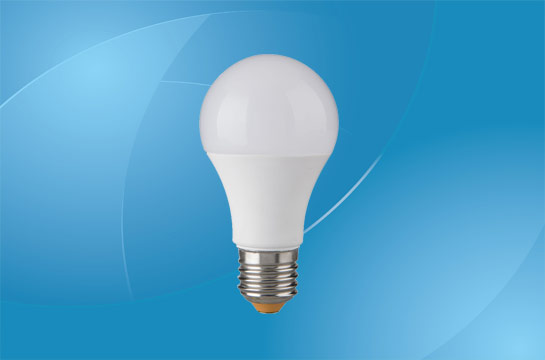